In accordance with the wishes of our Civil War ancestors who were members of the Grand Army of the Republic (GAR), wreaths are to be placed at 57 different cemeteries on Memorial Day.
Tent 23 has adopted the Corinth and Memphis National Cemeteries where they will place a wreath to commemorate the 2021 Memorial Day.

Wisconsin's Role at the Battle of Corinth:
The 8th, 14th, 16th, 17th, and 18th Wisconsin Infantry regiments and the 6th as well as the 12th Wisconsin Light Artillery batteries helped defend the city.

Wisconsin’s Role in Memphis:
The 40th Wisconsin Infantry (100 days, 1864) Moved to Memphis, Tenn., June 14-19, 1864. Attached to Post and Defences of Memphis, District of West Tennessee. Garrison, railroad guard and picket duty at and about Memphis, Tenn., till September. Repulse of Forest's attack on Memphis August 21.

Tent 23 has been a constant supporter of our veterans and current military personnel. Supporting the Housing 4 Our Vets program in Janesville, WI with annual donations of clothing, hygiene supplies, holiday cards and candy, we Tent also participated in the “Adopt a Vet” program providing items for that person from a Christmas “wish list”. The Tent is in the process of constructing 25-30 lap blankets with the intent of donating them to a State Veterans Home.
(see photos below)

DELAVAN CIVIL WAR MONUMENT LOCAL LANDMARK STATUS: Marking the end of the sesquicentennial of the Civil War in 2015, the Daughters of Union Veterans of the Civil War 1861-1865, Mary Chesebro Lee Detached Tent 23 of Delavan sought and received landmark status for the Civil War Monument located in the historic Spring Grove Cemetery in Delavan, WI.

The lineal organization approached Dan Kilkenny, chairman of the Spring Grove Cemetery Board with their request and was notified at the end of May that it had received permission from the Board to proceed. The Tent contacted Delavan’s Mayor, Mel Nieuwenhuis who presented a proclamation at a ceremony on Saturday, August 29th at Spring Grove designating the iconic Civil War Monument as a Landmark.

The Monument which was erected in 1870, was donated by Delavan benefactors, James and Susan Aram. Italian immigrant sculptor, John Bossi designed the marble and limestone structure at a cost of $1200. The Monument was originally dedicated on Delavan’s Decoration Day ceremony on May 30, 1870 which was presided over by James Aram. It is interesting to note that during the Civil War, when the population of Delavan was depleted by the number of volunteers enlisting, Aram personally paid $145 each for 14 volunteers from Madison to fill President Lincoln’s quota.

The Monument was extensively restored and conserved largely through the efforts of the Civil War Restoration Project Task Force chaired by, Ken Wargo. Corporate, individual and organizational donations in excess of $20,000 made possible this effort. The Civil War Monument which was rededicated at the 2014 Memorial Day Ceremony, stands proudly as a testament to the fifty-seven “Boys in Blue” from the Delavan area who gave their lives for our great country.

In attendance at the historic program was the First Brigade Band from Watertown, Wisconsin. The band of authentic historic reenactors played a selection of Civil War songs including “Lorena” which was written by our Walworth County’s historic composer, Joseph P. Webster during the Civil War. Our Brothers from C.K. Pier Camp 1, Milwaukee, Major General John Gibbon Camp 4, Waukesha, Colonel Hans Heg Camp 15 of Wind Lake and The Grand Army of the Republic Post 8 were also in attendance at the event where Past National Commander of the Sons of the Union Veterans, Steve Michaels was the keynote speaker.

As we observe the 50th Anniversary of the Vietnam War the Mary Chesebro Lee Detached Tent #23 has become proud partners with the United States of America Vietnam War Commemoration. As a grateful nation, we need to honor and thank our Vietnam Veterans and their families. The objectives of this organization include “highlighting the service of the Armed Forces during the Vietnam War and the contributions of Federal agencies”, “paying tribute to the contributions made on the home front by people of the USA”, “highlighting the advances of technology, science and medicine related to military research”, “recognizing the contributions and sacrifices made by the allies of the United States” and “ thanking and honoring veterans of the Vietnam War and the families of veterans”.

The 13 year program of commemoration will include programs and materials that can be viewed on the website developed for this event: www.VietnamWar50th.com. As an NSDAR chapter, we are eager to begin the commemoration honoring more than 58,000 patriots whose names are etched in granite because of their ultimate sacrifice and more than 1600 of our service members who are still missing as well as our wounded warriors from whom we drew inspiration. And we must remember it is never too late to pay tribute to the men and women who fought and returned. These individuals as the others mentioned deserve our complete respect and heartfelt thanks from a grateful nation.

ENCAMPMENT 2015:     Once again the Walworth County Historical Society (WCHS) hosted an encampment commemorating the Civil War. The Grand Army of the Republic, Post #8 Senior Re-enactors from Wisconsin returned and set up camp. The re-enactors answered questions about life for soldiers and sailors during the Civil War and displayed genuine items a soldier would carry. The Daughters of Union Veterans of the Civil War, Cordelia Harvey Tent #21 of Manitowoc set up a women's civilian camp and displayed needlework of the time (Huck towels) and gave a demonstration of quilting, allowing visitors to try their hand. Children participated in a scavenger hunt and were given a prize if they found all the items on the list. Sisters from Tent #23 served dinner on Saturday night and breakfast on Sunday morning. Sunday afternoon guests were treated to a style show of both soldiers wear and period costumes. Laurie Shawhan demonstrated the language of the fan.   Click on image to enlarge.

The Daughters of Union Veterans of the Civil War,Tent #23 of Delavan will conduct its second CEMETERY WALK at Spring Grove on Saturday, August 16th from 1:00-3:30 pm: To continue raising funding for the Civil War Monument located there. It is hoped that the monument will be able to achieve landmark status through this effort. The walk will include a tour of the mausoleum which was erected in 1911 and contains 12 Civil War soldiers who are encrypted there. Re-enactors will portray philanthropists James and Susan Aram as well as Dr. D.B. Devendorf who was a physician in the Civil War and returned to Delavan to establish his practice. Civil War era medical instruments will be on display at his gravesite. The story of Professor Rodliff Allen Palmer, a Civil War soldier and circus aerialist who ascended in hot air balloons will be related by his sister, Sarah Palmer who was a portrait artist. John Gould’s Civil War heroics will be retold by his great granddaughter. A detailed report on the conservation and restoration of the Civil War monument will be included on the tour of the historic cemetery. Guided tours will be conducted at 1:00 pm and 2:30 pm with self-guided tours available upon arrival. Donations are suggested so that the Daughters may continue with their mission of preserving the history of their ancestors who fought in the Civil War.

ENCAMPMENT 2014:     Continuing to fulfill the mission of collecting, preserving and sharing the rich history of Walworth County the Walworth County Historical Society (WCHS) hosted an encampment commemorating the 150th anniversary of the Civil War and the Spanish American War of 1898. Participants included the Grand Army of the Republic, Post #8 Senior Re-enactors from Wisconsin and members of the Sons of Spanish American War Veterans from Illinois. In addition, a women’s civilian camp was set up by the Daughters of Union Veterans of the Civil War, Cordelia Harvey Tent #21 of Manitowoc. Special events included a picnic dinner hosted by the Daughters of Union Veterans of the Civil War, Mary Chesebro Lee, Tent #23 of Delavan who also provided the campers with breakfast the following morning, a flag raising ceremony, an old-fashioned camp worship service and an ice cream social hosted by the WCHS on Sunday. During the ice cream social, the “Outdated D’s”, a roving barbershop quartet entertained the visitors. While weather was a factor Saturday evening and caused a great deal of excitement when torrential rains hit the camp, Sunday was beautiful and the events were well attended. The re-enactors enjoyed the event so much that plans are in the works for a return in 2015. Click on image to enlarge. 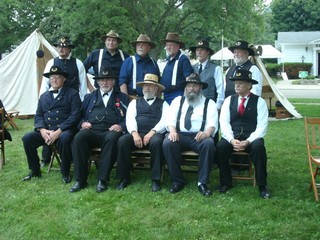 TENT #23 WAS EXTREMELY SURPRISED AND DEFINITELY PLEASED to be presented with an American flag from our Navy “nephew” James Stone. We had adopted James and his buddies by sending care packages overseas. On leave during the holidays, James stopped to present the flag to tent President, Pat Blackmer at her home. The flag was flown in combat over Afganistan on board a B-1B Bomber in support of Operation Enduring Freedom by the 9th Expeditonary Bomb Squadron in July and again in October with the VP-1 Combat Air Crew 6 aboard USN P-3C Orion which was also a mission in support of Operation Enduring Freedom. We are proud of our nephew and thank he and his buddies for their service to our great county. Click on image to enlarge.

TENT #23 PARTICIPATED IN THE FIRST ANNUAL WALWORTH COUNTY HISTORICAL SOCIETY CHRISTMAS TREE WALK by the invitation of sister Merrybell Seeber who was in charge of the holiday event by decorating a post Civil War table tree. Sister, Shirley Peterson who is a creative crafter provided the ornaments, cranberry strands and a pickle to complete the decorations. In addition, candle clips and candles we added to the festive tree to complete the mid nineteenth century look. We even had a water bucket just in case! Click on image to enlarge. 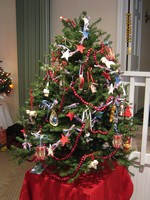 CONTINUED SUPPORT FOR THE RESTORATION OF THE 1870 CIVIL WAR MONUMENT:   In an effort to continue our support for the Delavan Civil War Monument Restoration, chaplain Shirley Peterson organized a huge and successful fundraiser for the tent. We were able to raise $639.60 through the sale of Butter Braids which are a delicious pastry. We are lucky to have such dedicated and innovative sisters in our group!

TENT #23 LAUNCHED A NEW PROJECT AT THEIR AUGUST MEETING:     Sister Barbara Hale has a nephew who is currently serving in the U.S. Navy at a base in the Persian Gulf. We have adopted him and his “Navy buddies” and will be providing care packages containing a variety of items. We thank our current military for their service which insures our freedom. Just imagine, Barb’s nephew now has nearly 40 new aunts! 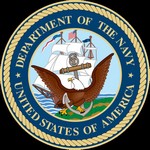 THE MARY CHESEBRO LEE DETACHED TENT #23 CONDUCTED A CEMETERY WALK AT SPRING GROVE ON SATURDAY, JULY 27 DURING THE HERITAGE FESTIVAL IN DELAVAN:     Tours were held from 1:00-4:00 pm and the sale of limited edition books which are still available helped raise $300 toward the restoration of the Civil War monument. To date the efforts have raised $15,000 towards a completion goal of $20,000. Participants in the event were (back row from left) Ann Day, Pam Johnson, Pam Wanazak, Barbara Hale, Patti Marsicano (front row) Judith Manning, Zoe Woelky, Pat Blackmer, Ken Wargo, Merrybell Seeber, Charlene Staples and Brian Staples. Not pictured were Martha Hay and Marilyn Traver. Click on image to enlarge. 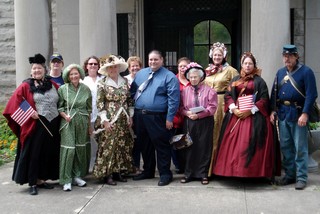 PAM'S PROJECT, PART II:    Pam Johnson compiled a limited edition book regarding the Civil War Monument in Spring Grove Cemetery. The 20 page book, which was printed in color and is for sale at the price of $10, contains the monument’s unique history and restoration efforts to date. All proceeds from the sale of this book will be used to assist with the preservation of the Civil War monument. In addition, Alex Johnson (son of Pam Johnson and grandson of Pat Blackmer) has produced an artistic rendering of the monument (click on picture on the right for a larger view) which has been made into postcards, notecards and prints which are also available for sale. Alex is an art student at the University of Illinois, Springfield.   (Click on "More Projects" at bottom right of this page for Pam's other project.)

All photos printed with permission.